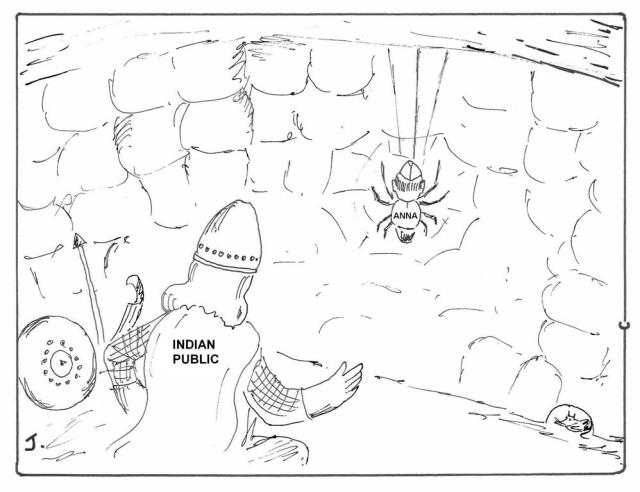 Anna and India Against Corruption are starting another campaign against a recalcitrant  government. To support them in their struggles, Anna’s supporters and the Indian public should draw inspiration from the saga of King Bruce and the spider:

FOR Scotland’s and for freedom’s right, The Bruce his part has played;
In five successive fields of fight, Been conquered and dismayed:
Once more against the English host, His band he led, and once more lost
The meed for which he fought;
And now from battle, faint and worn, The homeless fugitive, forlorn,
A hut’s lone shelter sought.

And cheerless was that resting-place, For him who claimed a throne;
His canopy, devoid of grace, The rude, rough beams alone;
The heather couch his only bed, Yet well I ween had slumber fled
From couch of eider down!
Through darksome night till dawn of day, Absorbed in wakeful thought he lay
Of Scotland and her crown.

The sun rose brightly, and its gleam, Fell on that hapless bed,
And tinged with light each shapeless beam, Which roofed the lowly shed;
When, looking up with wistful eye, The Bruce beheld a spider try
His filmy thread to fling
From beam to beam of that rude cot, And well the insect’s toilsome lot
Taught Scotland’s future king.

Six times the gossamery thread, The wary spider threw;
In vain the filmy line was sped, For powerless or untrue
Each aim appeared, and back recoiled, The patient insect, six times foiled,
And yet unconquered still;
And soon the Bruce, with eager eye, Saw him prepare once more to try
His courage, strength, and skill.

One effort more, his seventh and last! The hero hailed the sign!
And on the wished-for beam hung fast, That slender silken line!
Slight as it was, his spirit caught, The more than omen; for his thought
The lesson well could trace,
Which even “he who runs may read,” That Perseverance gains its meed,
And Patience wins the race.

A Cynic's Eye View: This is my tongue-in-cheek, one-eyebrow-raised, cynical view of the world of politics & the world of sports (and intriguing intersection of the two) by way of written posts and cartoons. All views expressed are my own (nobody else wants them). Follow me by subscribing here or on twitter @rp_71 Looking forward to the bouquets and brickbats in the comments section Cynics of the world, unite. We have nothing to lose, but our disdains…
View all posts by rp71 →
This entry was posted in Politics - India and tagged Anne Hazare, Cartoon, History, India, Manmohan, Transparency, Truth. Bookmark the permalink.