Proud to be an Indian

Why do we bemoan so often the state of India? Pick up the newspaper or turn on the television, the news is all gloomy all over the world. Political turmoil everywhere, followed closely by economic downtrends and social & humanitarian disasters. It’s in every nook and corner of the world in the last few years: Cote d’Ivoire, Kenya, Zimbabwe, Nepal, Thailand – not to forget the Islamic crescent from Morocco to Afghanistan.

Compared to these disaster zones, India is a sea of calm. And it has been so for the past 50 years. We owe it all to steadfastly holding on to the notion of a Democracy.

India had its tryst with destiny actually on 26 January 1950, when it adopted its Constitution and vowed to be a Democratic Republic. Since that day, democracy has survived in India – in spite of lurches and setbacks: the emergency imposed by Mrs Gandhi, the JP movement and its repercussions, social engineering which played out in the last 2 decades starting with Mandal, Babri Masjid (driving wedges of communalism), oscillations of coalition politics & hung parliaments, Naxalites / Maoists (still all pervasive and India’s biggest threat), language / regional movements and the blatant misuse of Central power. India has emerged stronger from these tests.

We have become a model for the developing world – to have sustained the democratic model despite of these setbacks and the adverse socio-economic conditions and demographics. India has sustained this government – in the face of being surrounded by neighbours with volatile neighbours, with a history of military coup, junta rule, dictatorships, civil wars, communist insurgency, public hanging of democratic leaders and an internecine war of independence (Bhutan is taking baby steps in democracy – let’s wait and watch).

Let’s compare ourselves with what the other countries (and their government systems) have gone through and wonder what could have happened:

Communist Dictatorship: USSR laid down the blue print (and test proofed it across the Warsaw Pact countries). China & Cuba followed suit. China has since modified its model to be a capitalist economy but still under a party-run communist regime. China with its state supported market development has clocked impressive GDP growth numbers, but at the expense of personal or democratic freedom. Development has only arrived in certain parts of eastern China, with sectarian riots have flaring up due to lack of development in Xinjiang & Tibet. I wouldn’t want to trade our democracy for all the gold in China, as it comes at the great expense of a gilded prison devoid of democratic rights and freedom. 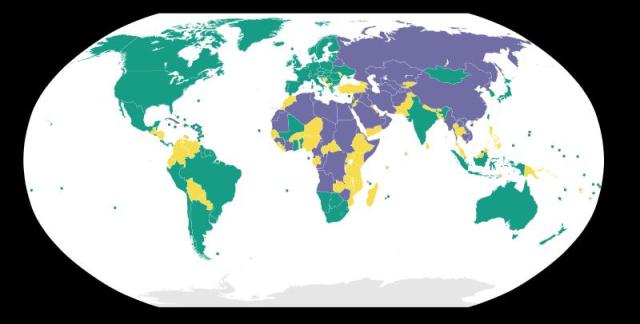 West Bengal and Kerala are the last bastions of communism in India – but it has never spread any further. Even in these states, the citizens have a choice of booting them out (which Keralites exercise with regular frequency when they toggle between UDF and LDF regularly and is expected in WB soon). A “Himalayan Blunder” prevented its ascendency to the throne in Delhi.

Strongman / Military / Junta-based Dictatorship: One of the most common forms of dictatorships in developing countries as the army becomes the custodian of power – “revolution literally through the barrel of the gun”. The military eventually ends up protecting the ruler, and not its citizen. Pakistan has had more years under military rule than civilian rule.

Thankfully, Indian armed services have remained true to their mandate, and have never come within a whiff of the intoxication of power. They have rather stood up to the civilian rule in service of the country (two fine examples: Gen Sam Manekshaw refused to advance the attack on Pakistan forces in 1971 on Mrs Gandhi’s instruction until he was sure the army was ready. And before the imposition of the Emergency, it is believed that Mrs. Gandhi asked for the Army’s support in the venture, but the Chief of Army Staff General Tapishwar Narain Raina bluntly told the Prime Minister that the army would not be used to ‘further her ends’ but obey only those orders of a ‘legally construed government’).

Theocracy: Slowly we are seeing incidences of countries adopting religious ideology as the mode of governance. Political divisions are ever so frequent in several country based on religious sects and faiths, which are abused by the political leaders for this dastardly benefits. Post-Ayatollah Iran and Taliban-ruled Afghanistan are prime examples. We can see the dangerous trends in several Islamic countries towards Sharia rule.

With its diversity of religions, India has done well to maintain its secular character. No other developing country has such a melting pot of religion: Largest Muslim population after Indonesia; Birth place of Sikhs, Buddhists & Jainism; Jews; Parsis to name the main minority religions. The minority religions have benefited rather from policies of appeasement through the various regimes. Even BJP suppressed their saffron tendencies when in power.

Monarchy: Most monarchies have died away or been replaced in the Modern Age, with remnants mostly titular positions. India took a positive step by banning all monarchies after Independence and the subsequently abolishing privy purses. Legitimate ex-monarchs have since adapted as democratic candidates, though their demeanour might still be regal.

I strongly feel we have the best government system to take care of our problems. At present, India has adopted it well to suit its peculiarities and constrains. We can make it better and use the features of a democratic rule to fight the scourges of corruption & inequitable-development:

– Zero tolerance on corruption – from top to bottom. Stringent laws and unflinching enforcement. Incentivise the enforcers. Jan Lokpal Bill will go a long way in achieving that. Only in a true democratic system could a single man (Anna Hazare) use people power to bring about change.

– Encouragement for entrepreneurship & facilitation of market access. People do not want hand-outs – they want dignity and a just reward for their labour. Support microfinance and small-scale business (SSI).

Leaders and politician who focus more on development and less on political & divisive games are the wave of the future. Bihar (one of the basket-case BIMARU states) has turned it around. Gujarat is a shining example of entrepreneurship and resilience.

Democracy with universal suffrage is a very recent phenomenon – not more than 200 years in man’s recorded history of 3000 years. Who knows, a better system might come along later. No system is perfect. Even ‘developed’ countries do not have perfect systems.

We should take a deep breath, compare ourselves with citizens of other developing countries and exhale a collective sigh of relief. We should be proud to be Indians and part of a sustainable democratic government system.

A Cynic's Eye View: This is my tongue-in-cheek, one-eyebrow-raised, cynical view of the world of politics & the world of sports (and intriguing intersection of the two) by way of written posts and cartoons. All views expressed are my own (nobody else wants them). Follow me by subscribing here or on twitter @rp_71 Looking forward to the bouquets and brickbats in the comments section Cynics of the world, unite. We have nothing to lose, but our disdains…
View all posts by rp71 →
This entry was posted in Geopolitics, Politics - India and tagged Anne Hazare, Gandhi, History, India, Lokpal. Bookmark the permalink.

4 Responses to Proud to be an Indian